Democrats Will Say Anything to Grow their Power

They’ll say whatever it takes, regardless of the facts or what they previously said.
They Dissemble: to put on a false appearance: conceal facts, intentions, or feelings under some pretense.
Pretense: a claim made or implied, especially one not supported by fact; an inadequate or insincere attempt to attain a certain condition or quality.

Democrats have attacked election integrity, and the filibuster, as “racist” or “undemocratic”.
They’re promoting what is described as “the nuclear option”: eliminating the Senate rule requiring 60 votes to end debate and move to a vote on specific legislation, specifically HR.1/S.1, the For the People Act.

Here’s how proponents of the filibuster have described its elimination (the nuclear option):
Sen. Chuck Schumer in 2005:
“We are on the precipice of a crisis. A constitutional crisis. The checks and balances which have been at the core of this republic are about to be evaporated by the nuclear option. The checks and balances which say that if you get 51% of the vote, you don’t get your way 100% of the time. Almost a temper tantrum by those … who want their way every single time. That … is what we call abuse of power.”
You can watch Sen. Schumer’s speech in this C-Span video, beginning at 20 minutes, 40 seconds.

Then Sen. Barack Obama in 2005 commenting on the American people:
“What they don’t expect is for one party to change the rules in the middle of the game so that they can make all the decisions while the other party is told to sit down and keep quiet. If the majority chooses to end the filibuster, if they change the rules to end democratic debate, the fighting and the bitterness and the gridlock will only get worse.”
You can watch Schumer’s speech in this C-Span video, beginning at 6 minutes, 36 seconds.

Sen. Maggie Hassan in 2017:
“We … urge you to support our efforts to preserve existing rules, practices, and traditions as they pertain to the right of Members to engage in extended debate on legislation before the United States Senate.” “We are asking you to join us in opposing any effort to curtail the existing rights and prerogatives of Senators to engage in full, robust, and extended debate as we consider legislation before this body in the future.”

The filibuster was a Senate rule until then Majority Leader Harry Reid and Democrats voted for the “nuclear option” in 2013, which eliminated the filibuster for executive branch and judicial nominees.
With that as a precedent, four years later, Republicans under Senate Majority Leader Mitch McConnell extended the policy to Supreme Court nominees.

The lesson is that Democrats will adjust their position whenever it suits their political advantage.

On Election law, recall in 2019 when Senator Shaheen and Democrat Presidential Candidates Criticize NH Voting being only for NH Residents. 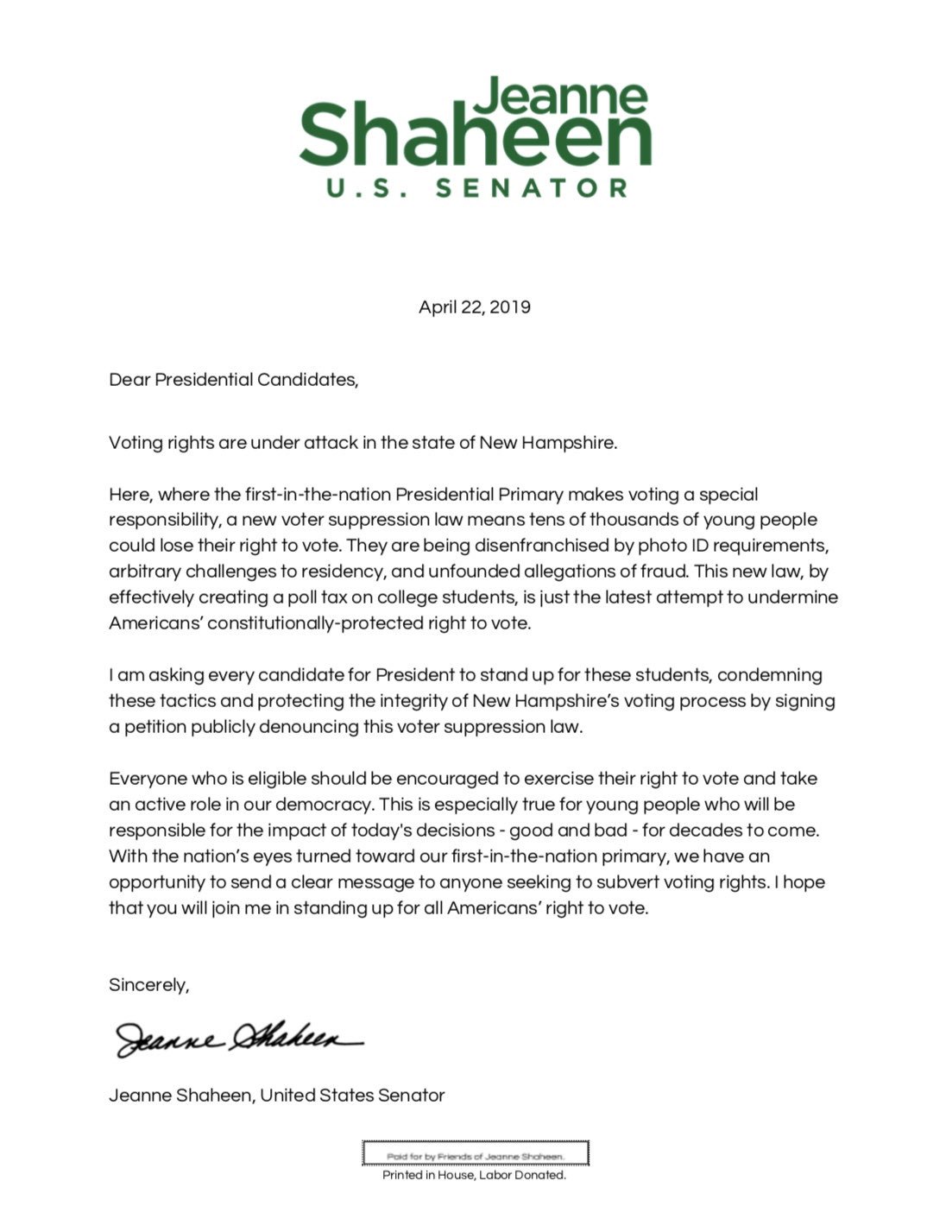 Shaheen said people were being disenfranchised by:
“photo ID requirements, arbitrary challenges to residency, and unfounded allegations of fraud.”
And, HB 1264 is “effectively creating a poll tax on college students .. to undermine America’s .. right to vote.”

Sen. Shaheen ignored that the New Hampshire Supreme Court found House Bill 1264 constitutional.
GST supported HB 1264 to end voting in NH by residents (6,540 in 2016) of other states.
GST often pointed out that HB 1264 made NH election law identical to 49 other 49 states and DC.

Shaheen and her drive-by voting advocates ignored that fact, seeing advantage in lax election law.
Democrat Presidential hopefuls rallied around Shaheen to criticize HB 1264 and Gov. Sununu.
Supporting Shaheen were Kamala Harris (CA), Kirsten Gillibrand (NY) and Cory Booker (NJ), plus others.
Each rejected HB 1264, but didn’t mention Election Law in each of their states was identical to it.

Then Sen., now Vice President, Harris didn’t care that in California, voters must be a:
“a resident of California”
The Brennan Center for Justice Student Voting Guide provides this advice for students in California:
“Students can establish residency in California if they have a present intention to remain at their California school address for the time being, and they intend to make it their principal home. Any other interpretation of the residency laws is unconstitutional.”

Why would Democrats criticize New Hampshire law while identical laws are in place in their states?
Ignorance? (of their own states’ laws)
Pretense? (an inadequate or insincere attempt to attain a certain condition or quality)
OR:
They expect a better chance of winning New Hampshire elections if out of state residents can vote.

They’ve advocated for lax election laws for some time. The For The People Act is just the latest one.