Did Climate Change Cause the Deadly December Tornadoes?

The Deadly December Tornadoes.
Two major events have occurred as unusual south central early December warmth began to clash with advancing cold. Tornadoes were the big story on December 10, 2021 and winds and severe weather on December 15, 2021. 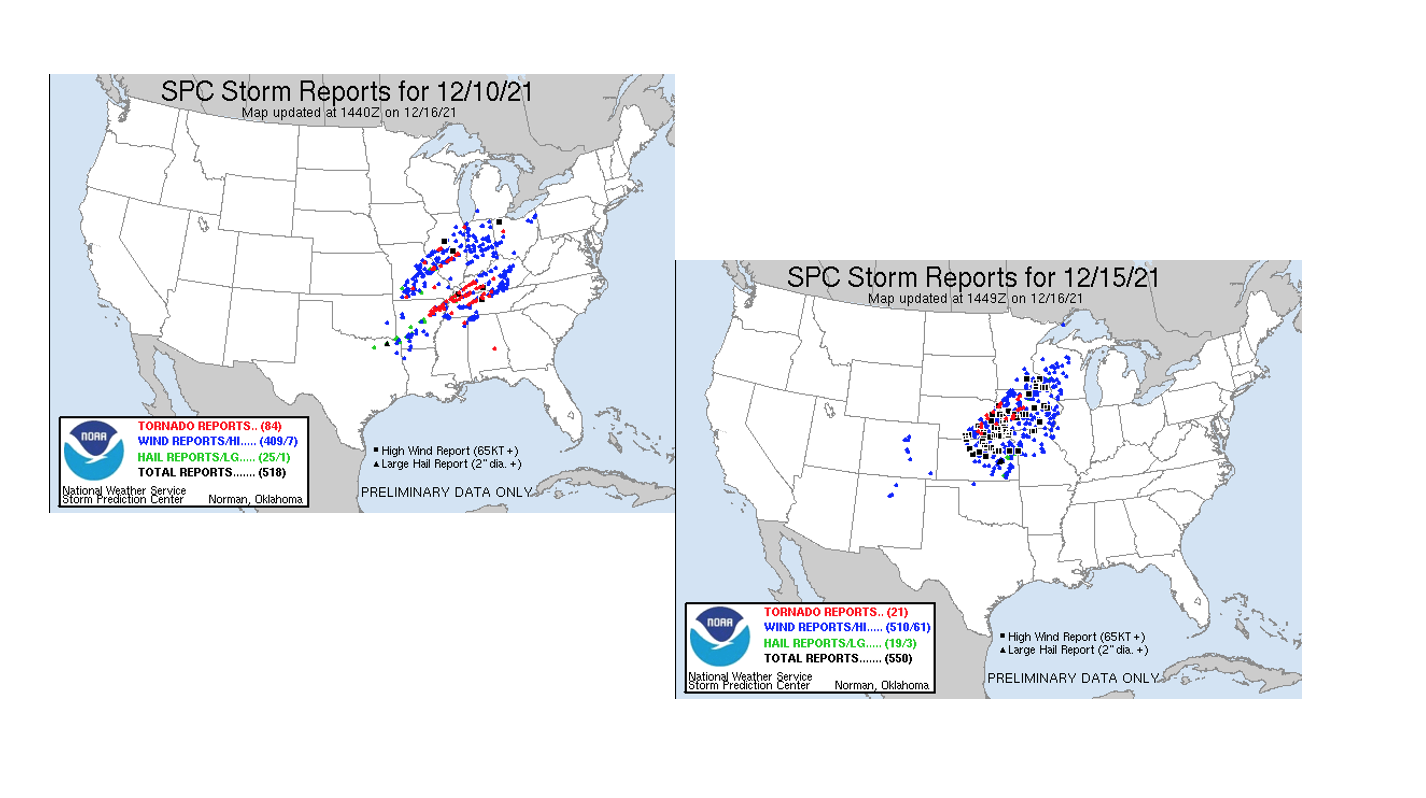 Tornadoes are a global phenomenon but about 75% of them occur in the United States.
The U.S. severe weather season typically starts in the late winter and spring when the combination of warmth and moisture from the Gulf of Mexico can be drawn north ahead of strong cold fronts coming out of the snow-covered mountainous west. A strong thermal contrast enhances the winds and wind shear that spin up rising air in thunderstorms ahead of cold fronts into funnel clouds and tornadoes.

The severe weather focus then shifts west and north during the spring into the summer. Outbreaks late in the year are rarer but can happen when warm, moist air is being drawn north from the Gulf of Mexico as the pattern begins turning colder, as we have seen the last week.

Tornado detection improved with the addition of Doppler radar (NEXRAD) that detects rotation in thunderstorms, trained spotter networks, storm chasers armed with cellular data and imagery as well as the proliferation of cell phone cameras and social media.

Tornadoes, based on estimated winds and damage assessments, are rated on a scale from EF0 (weak) to EF3 (Strong) to EF5 (violent).

The media, many politicians, government agencies and institutions that have benefited from climate change policies and financial support that results, are quick to describe the inevitable occasional extreme events as the “new normal”.

The reality is that tornadoes have seen a drop in frequency since the 1950s.
Better detection shows up most in the weak EF0 tornado counts but for storms that strong to violent (EF 3+ intensity), the trend has been down (more than 50%) in the 50-year record despite improved detection. 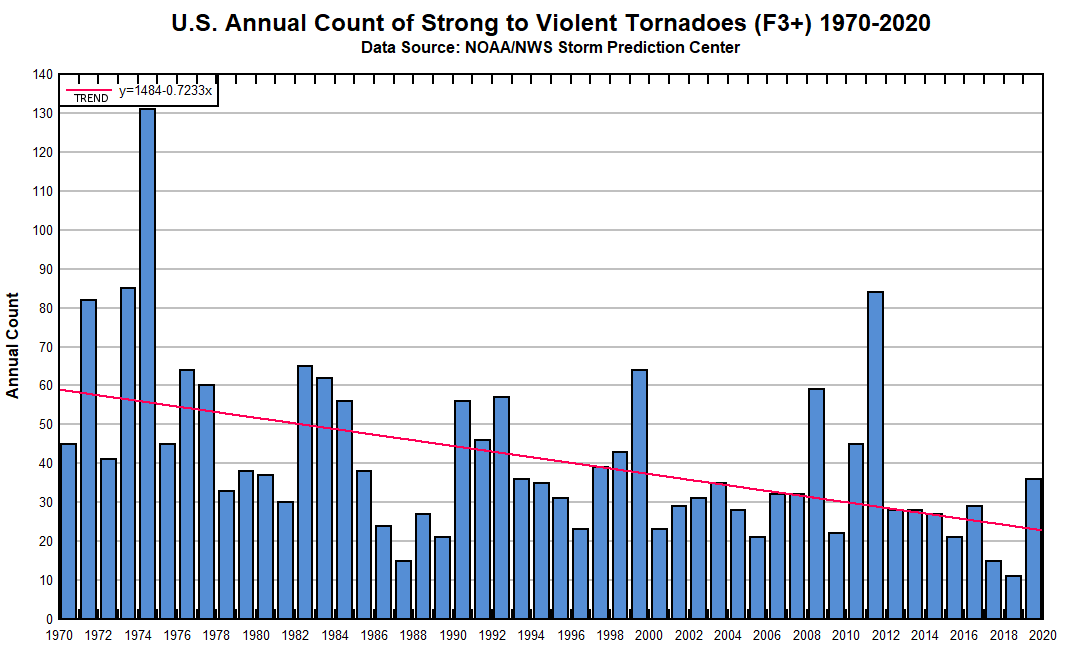 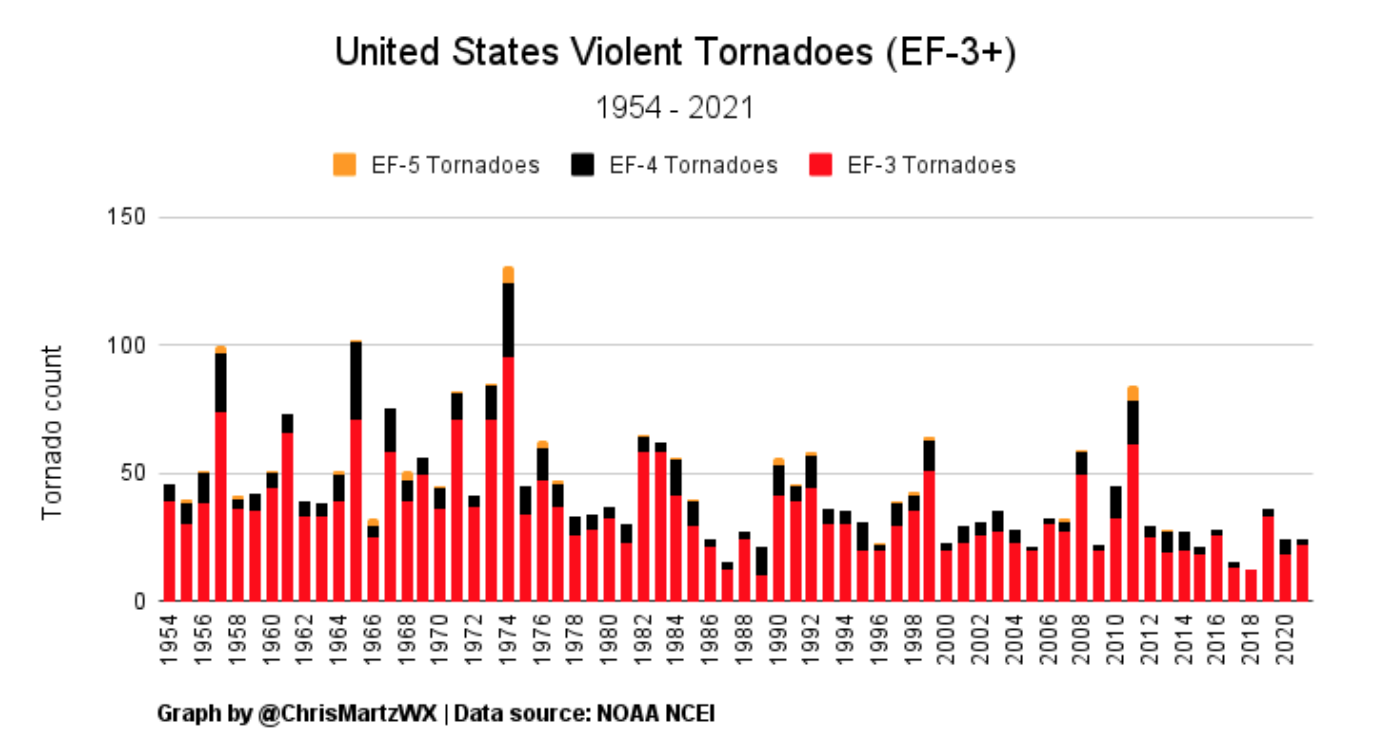 Greg Wrightstone of the CO2 Coalition shows how strong tornadoes are not tracking with CO2. 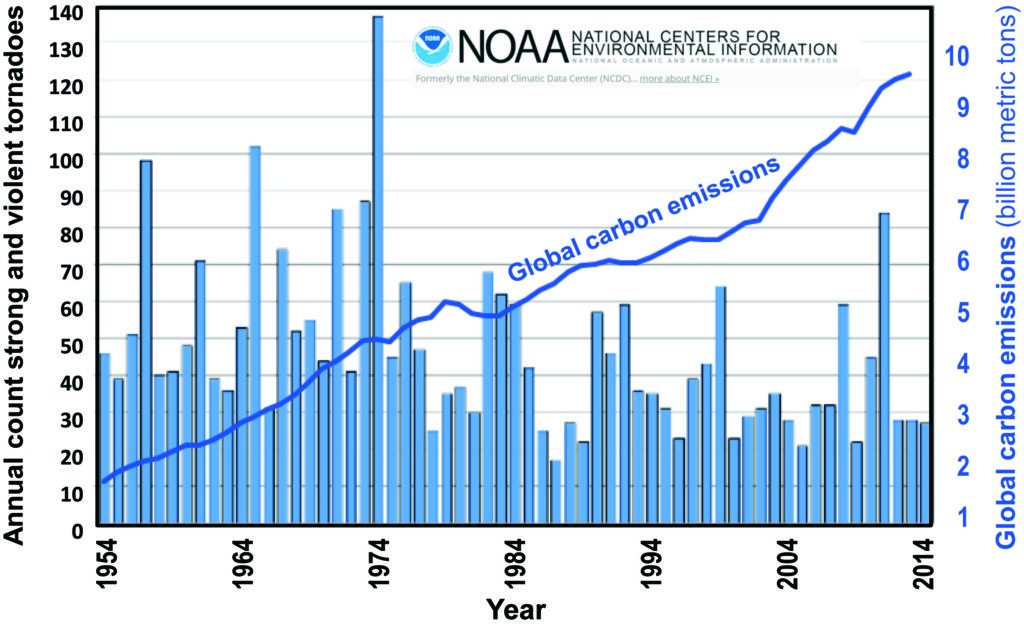 Population growth and expansion outside urban areas have exposed more people to the tornadoes that once roared through open fields. But awareness and early warnings have saved lives.

The two record-low years for number of tornadoes both occurred this past decade, in 2014 and 2018.
2019 bounced to the 75th percentile but the last two years saw it drop below average, and even after two major outbreaks with around 110 reported tornadoes in December 2021 the year will end below the 25th percentile.

The two newsworthy major outbreaks in December 2021 included an initial estimate of around 110 tornadoes, where 4 of the storms were preliminarily rated as a strong EF3 including one long track tornado that remained on the ground for 240 miles from Arkansas to Ohio. 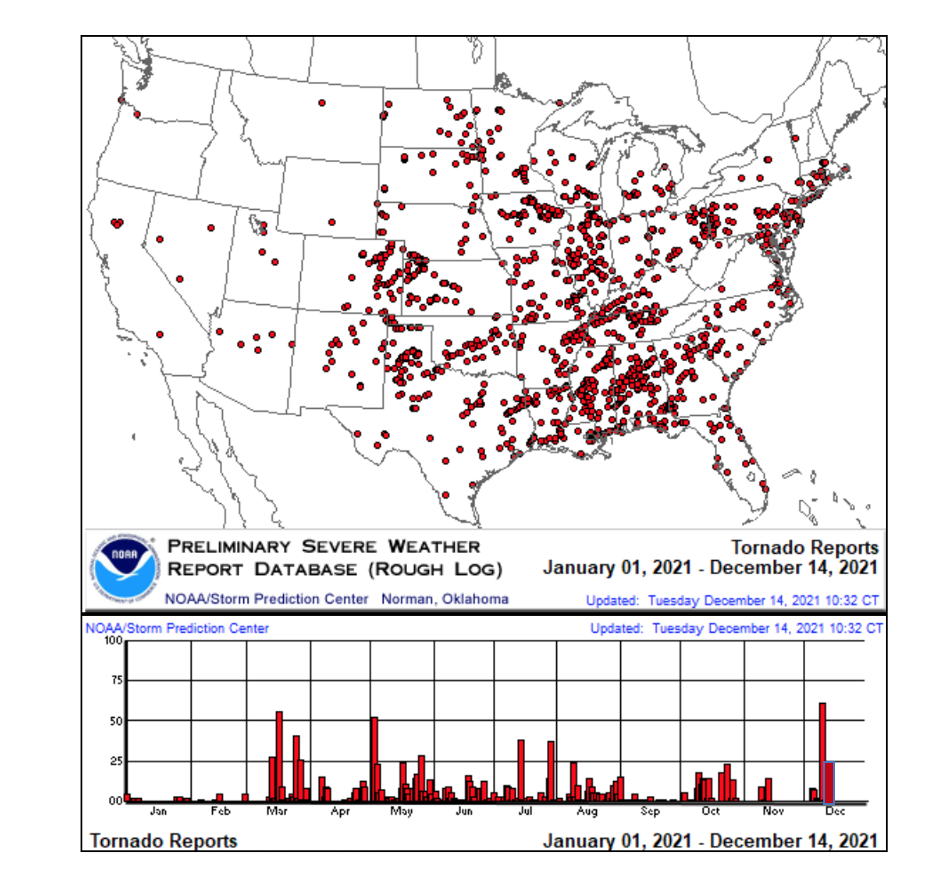 Most tornadoes stay on the ground a short time and travel short distances – 3 to 4 miles on average.
Long-track and very long-track tornadoes – those that travel at least 25 and 100 miles respectively – are relatively uncommon. They account for less than 1% of all tornadoes in the United States. Long-track tornadoes require a very specific set of ingredients that must exist across a wide area. These uncommon tornadoes form from a single supercell storm – a storm with a rotating updraft called a mesocyclone – that can persist for hours. 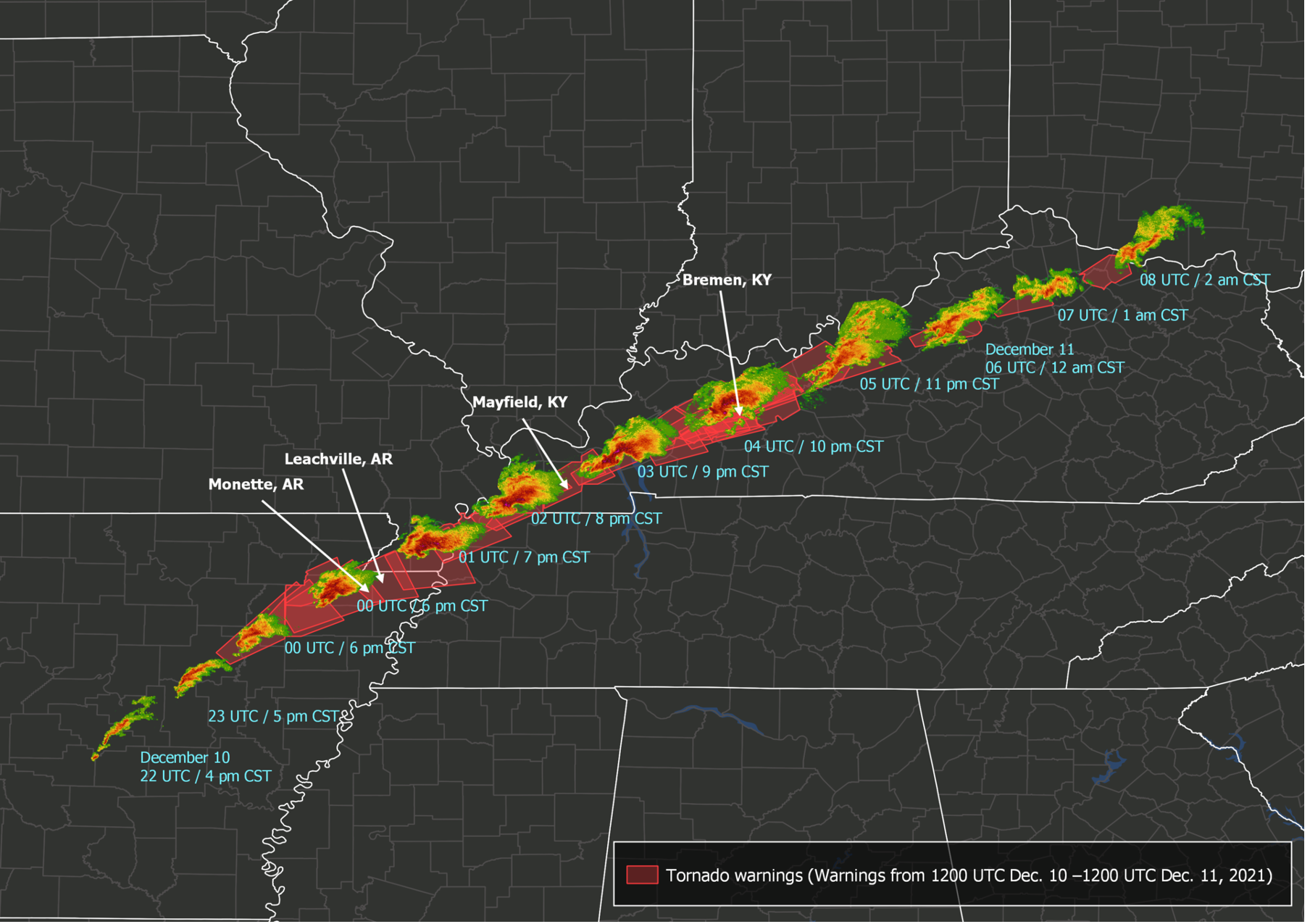 On 18 March 1925, a tornado traveled at least 219 miles through Missouri, Illinois and Indiana.
It killed 747 people, more than any other tornado in US history. The tornado lasted 3.5 hours, longer than any other in recorded history. 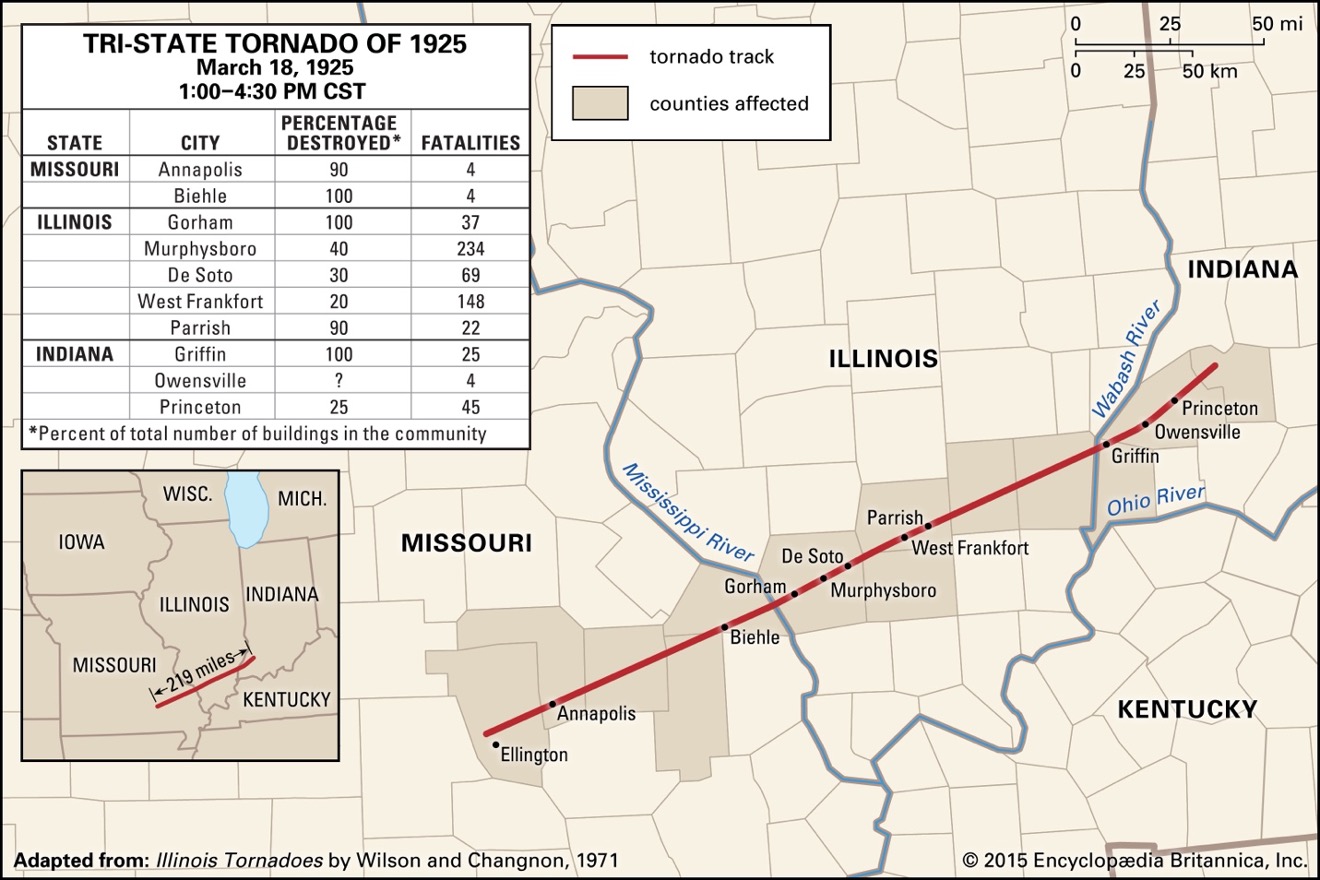 Despite the heart-breaking coverage of the damage and deaths, better awareness and forecasts saved lives.

This recent decade long lull period followed a very active and deadly strong La Nina of 2010/11, which like the strong La Nina of 1973/74 produced record setting and very deadly outbreaks of tornadoes. La Nina is a recurring pattern of unusually cold water in the eastern tropical Pacific Ocean that affects weather patterns globally including the United States in all seasons. It is the opposite in appearance and impacts from the more widely known warm event known as El Nino.

Tornadoes like most all weather extremes are driven by natural factors.
Active tornado seasons or years with major outbreaks are strongly correlated with stronger La Nina events and the cold phase of the Pacific Decadal Oscillation, which favors more frequent and stronger La Ninas. 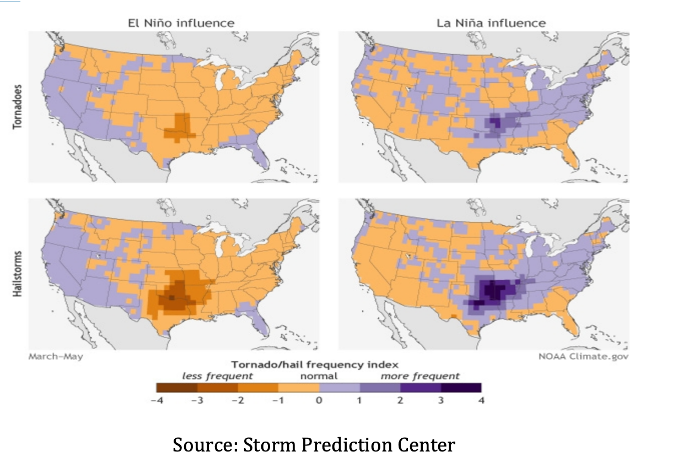 With a moderate La Nina currently in place and the Pacific in a La Nina favoring (cold) mode we may be entering an era like the 1950s to 1970s when La Ninas dominated, and tornado seasons were active. The two worst December killing tornado outbreaks were in the 1950s.

Given the La Nina and two rare December outbreaks, we should prepare for active seasons ahead.