This April 7, 2022 column by Peter Roff appeared at Sit News.

For at least a decade, American progressives have been waging war on the nation’s energy sector.
They’re all in on wind and solar and are using scare tactics, tax breaks, and government preferences to push a Green Agenda that leaves zero room for oil, coal, or natural gas.

That’s the real Biden policy, fulfilling a vow he made in September 2019: “I guarantee you, we are going to end fossil fuel.” And for the past 15 months, the president has done his best to keep that commitment. 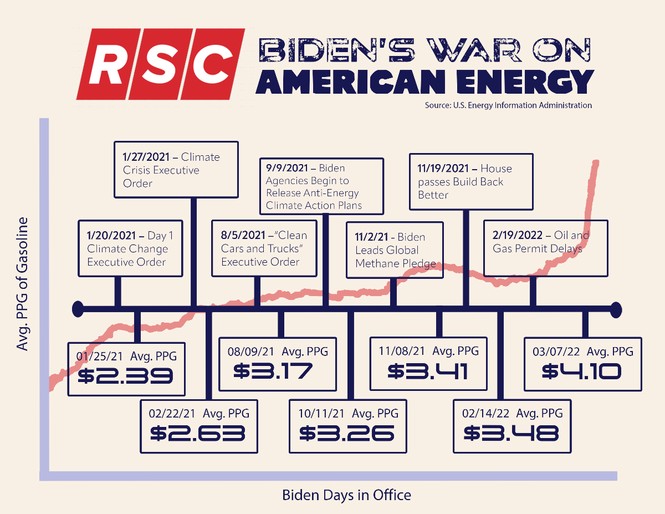 Such grandiose plans come at a price.
Biden’s anti-fossil energy positions are causing tremendous political harm to himself and his party. Prices are up. His approval is down. His solution? Pass the buck, as the White House did recently when it called the spike in energy costs “Putin’s Price Hike.”

The people aren’t buying. Only 27 percent of voters in a recent Winston Group survey agreed America must “reduce reliance on oil and gas even if it means higher costs because that is the only way to ensure a transition to alternative energy.” By more than two to one they believe, the nation should continue to rely on oil and gas to meet current energy demands while “transitioning over to alternative energy” sources.

America’s current energy needs conflict with the Biden Administration’s climate policy priorities, but that doesn’t stop progressives from arguing the need for more green energy and less traditional fuels. Even when the average national price at the pump is well over $4 a gallon.

Energy costs are the main driver of inflation.
In 2021, they were up 29 percent over the previous year. The price of gasoline surged, fuel oil costs jumped 41 percent, and overall yearly inflation hit an alarming 7 percent. The Biden people haven’t got a clue. In early March White House Press Secretary Jenn Psaki incorrectly claimed the administration’s energy policy was not to blame for increased prices. When pressed, she argued “The Keystone Pipeline was not processing oil through the system. That does not solve any problems. That’s a misdiagnosis or maybe a misdiagnosis of what needs to happen.”

It’s Psaki who made the “misdiagnosis.” An operational Keystone XL would have augmented the capacity of an existing pipeline running from Alberta, Canada to Superior, Wisconsin, delivering 830,000 additional barrels of oil a day.

Biden’s vilification of the oil and natural gas industry at a time when it’s needed to keep the economy and the country going is not new. Since its earliest days, his administration has pushed the cost of conventional fuels up through the Keystone XL Pipeline cancellation and the moratorium on new oil and gas leases on federal lands. Republican Rep. Jim Banks of Indiana recently released a study identifying more than 80 specific actions the Biden Administration has taken on energy-related matters that have helped boost the price at the pump. In Banks’ words, “President Biden has waged an unprecedented, government-wide assault on our nation’s ability to produce cheap, reliable energy.”

That’s why Americans have seen a steady increase in energy prices, not the invasion of Ukraine.
Biden’s moratorium on federal leases is another problem. Many current leases are tied up in litigation. New leases on federal land were brought to a halt. The administration’s refusal to renew the Interior Department’s five-year offshore leasing plan, set to expire at the end of June has imposed a further strain on production. If the plan is not renewed, expect overall fuel production to drop by the tune of 500,000 fewer barrels of oil and gas produced per day from 2022 to 2040.

The United States Energy Information Administration’s Annual Energy Outlook 2022 predicts petroleum and natural gas will be the most used fuels in the U.S. through the year 2050. That’s reality – unless the government intervenes by imposing mandates that restrict or ration the production and use of fossil fuels.

That’s a problem domestically and internationally.
Having the ability to turn the spigot on here at home, means there’s no need to reach out to hostile countries with offers to alleviate economic sanctions placed on them over their disregard for human rights and the threats they pose to the United States in exchange for access to their oil reserves. That’s a fool’s bargain – but one America’s current leadership is telegraphing it is ready to make.

Even without the war in Ukraine, people have realized we need abundant, reliable oil and gas “made in America.” Going to other countries is not the answer, nor is making an expensive, lengthy, transition to renewable sources that compromises our economic strength and national security.

We must increase oil and gas production in the U.S. now.
We have the resources – we need the administration to get out of the way of developing them.

Peter Roff is affiliated with several Washington, D.C. public policy organizations and is a former U.S. News and World Report contributing editor who appears regularly as a commentator on the One America News network.
He can be reached by email at RoffColumns@GMAIL.com. Follow him on Twitter @PeterRoff.