How Bad Could Energy Prices Get?

How bad could it get?
Gasoline prices have risen about 35 cents a gallon on average over the last month, according to the AAA motor club, and could reach $4 a gallon in some states by summer, when many were hoping they could travel again. Heating oil prices are also rising. Our government, most every company and the media are talking carbon reduction, even capture.

Do we really have a “carbon problem” or are we ignoring the reality about Air Pollution?
In the post World War II boom, pollution from factories, coal plants, cars/trucks, inefficient home heating systems and incinerators in apartments caused air quality issues with soot, SO2, ozone, hydrocarbons, Nitrous Oxides, and lead. We set standards that had to be met by industry and automakers and now have the cleanest air in our lifetimes and in the world.

Air pollution consists of small particulates (PM2.5). US levels have diminished 43%, below our goals.
US, Scandinavia and Australia have the lowest levels in the world; highest are in China, Mongolia and India! 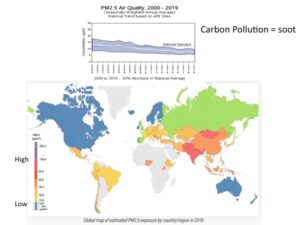 CO2 is not a pollutant. CO2 is a valuable plant fertilizer. We pump CO2 into greenhouses. 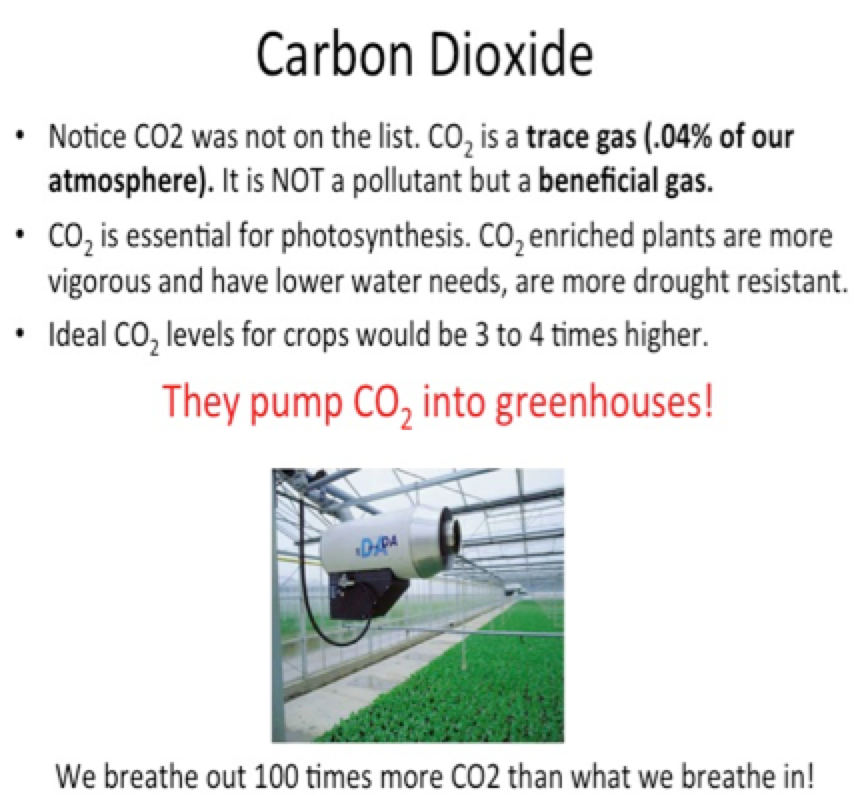 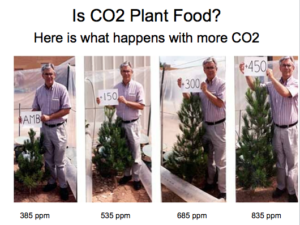 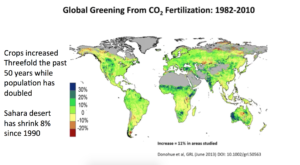 Global prosperity has improved with increased CO2 while poverty declined. 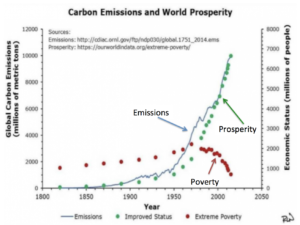 Green carbon taxes or reductions cause electricity prices to rise.
Rates in RGGI northeast states have matched those in crazy green California. 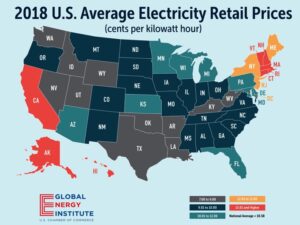 Under the green-friendly Biden administration, it will get worse.
The US Chamber of Commerce Global Energy Institute’s Energy Accountability Series 2020 projects:
Energy prices would skyrocket under a fracking ban and would be catastrophic for our economy. If such a ban were imposed in 2021, by 2025 it would eliminate 19 million jobs and reduce U.S. Gross Domestic Product (GDP) by $7.1 trillion. Natural gas prices would leap by 324 percent, causing household energy bills to more than quadruple. By 2025, motorists would pay twice as much at the pump ($5/gallon). This will lead to soaring energy prices and life-threatening blackouts. For a family of 4 in a modest house with 3 cars, the energy costs could increase well over $10,000/year.

Worldwide, green country electricity prices are three times ours (bottom of the list). For how long? 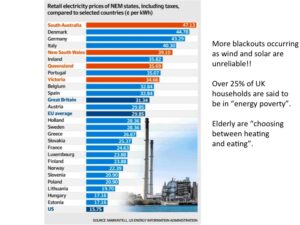 Apply the Chamber’s projections to a modest family home and lifestyle and they would pay much more for energy ($13,000 per year!). 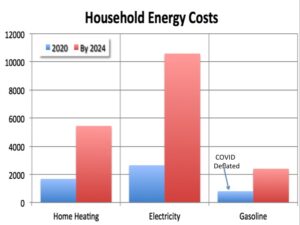 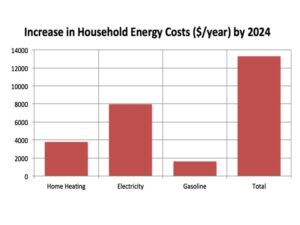 Retirees and lower income families pay the highest % of income (over 40%) for energy now even with energy costs low. They would suffer the worst as other parts of the world have already learned. 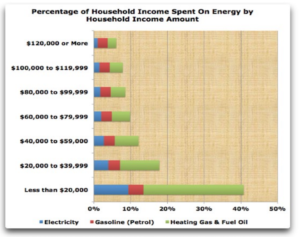 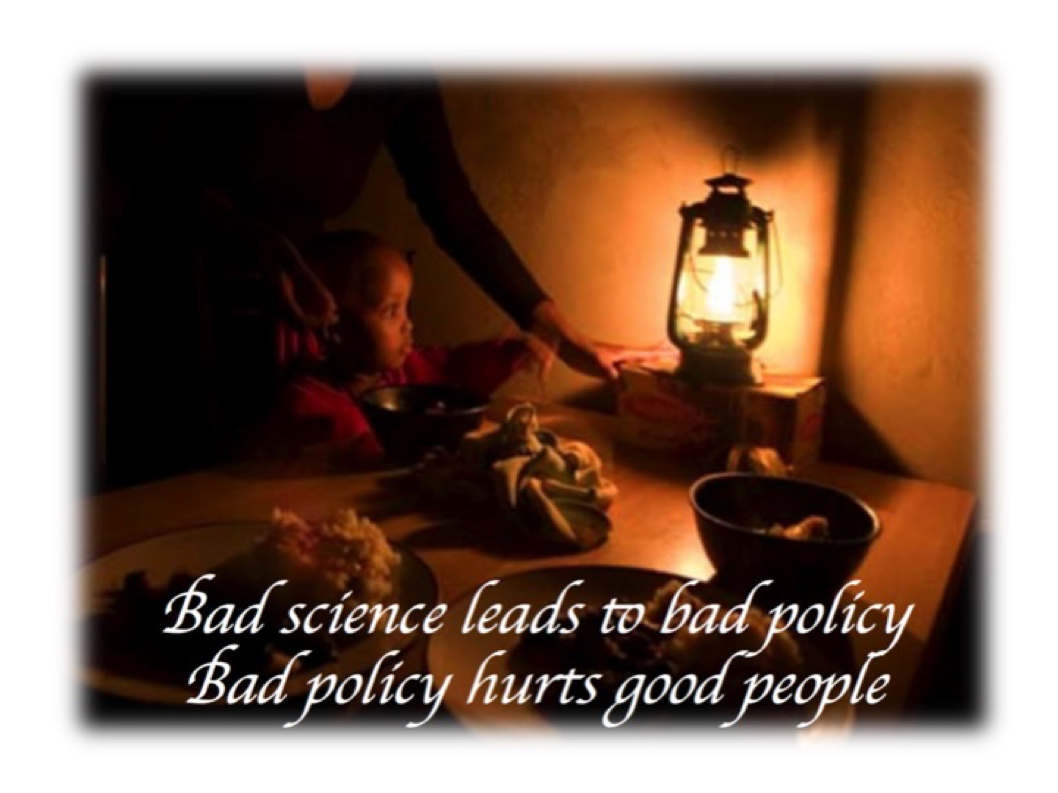 Perversely, when families can’t afford to pay for the energy (heating oil, gas or electricity) to heat their homes in winter, they revert to burning wood. This introduces the particulate matter and other pollutants we have worked so hard to remove at the source.

Natural cycles in the oceans and on the sun, and volcanism, explain all the variability in the last century, including changes in extremes of weather. This means that CO2 has no effect.

It’s going to be a wild ride the next few years, with politics and science pushed by globalists, the media corrupted and young people being misled by a failing education system. Honest scientists are being attacked or punished and legions of them have been silenced.
The battle for Climate Facts and truth will continue, must continue.

GST Board member Joseph D’Aleo has previously commented for GST on the climate change agenda.
A Weather Channel co-founder, D’Aleo has 50 years experience in professional meteorology.
He is a Certified Consultant Meteorologist and American Meteorological Society (AMS) Fellow.