Reimagined Science for the Green Agenda

The Scientific Method has been manipulated to serve the Green Agenda.
GST Board member Joseph D’Aleo describes how and why that has happened.

Climate Alarmists allege that “the science is settled” and “97 percent of scientists agree.”
But the scientific method does not involve a poll or vote by scientists to assess a consensus view, but rather the validation of a theory by rigorous and unbiased application of the scientific method, which is no longer taught in schools where students are taught what to think not how to think.

The Scientific Method
The scientific method in science was a long-established iterative process. It starts with a theory or hypothesis. The data needed to test it and all possible factors involved are identified and gathered. The data is processed and the results rigorously tested. The data and methods are made available for independent replication. Reviewers for the proposed theory must have the requisite skills in the topic and in the proper statistical analysis of the data to judge its validity. If it passes the tests and replication efforts, a conclusion is made and the theory may be turned into a paper for publication. If it fails the tests, the hypothesis or theory must be rethought or modified. 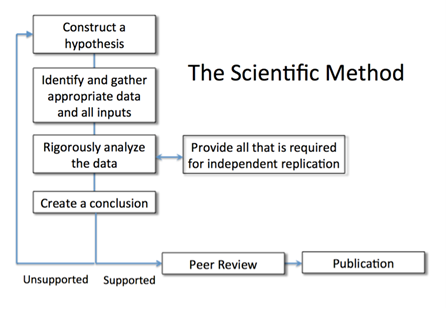 Cornell physicist/lecturer Richard Feynman argued when new ideas are offered for consideration, they should be tested by means of skeptical thinking and should stand up to rigorous questioning. He said:
“If a theory or proposed law disagrees with experiment (or observation), it’s wrong. In that simple statement is the key to science. It doesn’t make any difference how beautiful your guess is, it doesn’t matter how smart you are who made the guess, or what your name is…. If it disagrees with experiment, it’s wrong. That’s all there is to it.”

Science and the peer review process are failing due to political and economic pressures that have altered the scientific method to virtually ensure a politically correct or economically fruitful theory can never fail.

When the tests fail, instead of rethinking the theory or including other factors, there is an alarming tendency to modify input data to more closely fit the theory or models. 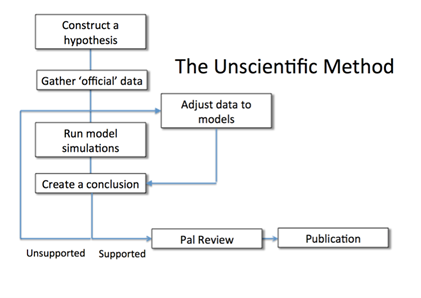 Meanwhile, because it is largely political in its origins, pressure was made to make it appear the vast majority of scientists supported the theory and model based alarmist claims.

Manipulating the data is what created “97% of Climate Scientists agree!”
Click here to see how that claim was fabricated and how it misrepresents what scientists really do agree to.

Why this is happening?
Climatology wasn’t a recognized specialty or profession even at colleges into the early 1980s. It was mostly a small part of introductory classes on weather or in geography or geology courses. When climate change became part of an anti fossil fuel agenda and big grant money suddenly appeared, teachers never trained in climate suddenly became ‘climate scientists’. Environmental sciences emerged as a career path.

The UN, politicians, industry and the mainstream and on-line media would want you to believe that all scientists have now seen the light, that there is a consensus. That is not the case.
Most honest scientists know so. Many are forced into silence or if they vocalize their dissent, find their careers endangered or even destroyed. Still many when past the stage of their career where they can speak the truth, do.

It’s an uphill battle to restore science and reason into the climate debate.
Alarmists have the advantage of a huge ‘social support’ group of grant seeking modelers and researchers, agenda driven or ratings driven journalists, environmentalists and corporations that have realized green (agenda) is their favorite color and see this as a way to keep green ($) paper flowing into their coffers and pockets, farmers who are benefiting from the misplaced focus on alternative fuel from crops which has sent the cost for their crops to record levels, traders and major market firms licking their chops at the prospects of big time money from alternative energy companies that have realized this is the vector to bigger profits and the politicians and political activists who see it as a way to accomplish ulterior goals about changing society and increasing their power base.

The universities, professional societies and even congress has taken serious and alarming steps to eliminate (punish) doubters and public opinion. They even attack any of their own who speak out, including formerly outspoken environmentalists like Dr. Patrick Moore, co founder of Greenpeace, and Michael Shellenberger, former Time Magazine ‘Hero of the Environment’, who apologized for the false scare.
His apology for the false scare was published by Forbes. Forbes was then forced to remove it.

A team of politicians and university professors benefiting greatly from this issue even threatened in 2015 to use RICO (Racketeer Influenced and Corrupt Organizations Act) against any vocal doubters that remain and dared to speak out.

We were warned about this kind of behavior for money or power.
H.L. Mencken, famous columnist: “The whole aim of practical politics is to keep the populace alarmed – and hence clamorous to be led to safety – by menacing it with an endless series of hobgoblins, all of them imaginary.” And, “The urge to save humanity is almost always only a false face for the urge to rule it.”

Well before the climate change scare started, President Eisenhower warned in his farewell address in 1961.
“… [In] the technological revolution during recent decades… research has become central … complex, and costly. A steadily increasing share is conducted for, by, or at the direction of, the Federal government … the solitary inventor … has been overshadowed by task forces of scientists in laboratories and testing fields … the free university, historically the fountainhead of free ideas and scientific discovery, has experienced a revolution in the conduct of research. Partly because of the huge costs involved, a government contract becomes virtually a substitute for intellectual curiosity. The prospect of domination of the nation’s scholars by Federal employment, project allocations, and the power of money is ever present and is gravely to be regarded.”
President Eisenhower’s words in his Farewell address have been proven remarkably prophetic.

This is political not scientific, as demonstrated by these quotes from some of the leaders in the climate movement that expose their true motivations and intentions.

Conclusion
The 97% consensus claim is simply a convenient fiction to bypass the scientific method and supress any inconvenient facts that arise in order to drive policies.

The Scientific Method and Peer Review Process failed due to political and economic pressures designed to ensure that a (politically correct or economically beneficial to some) “Green House Gas” (GHG) theory can never fail to be validated.