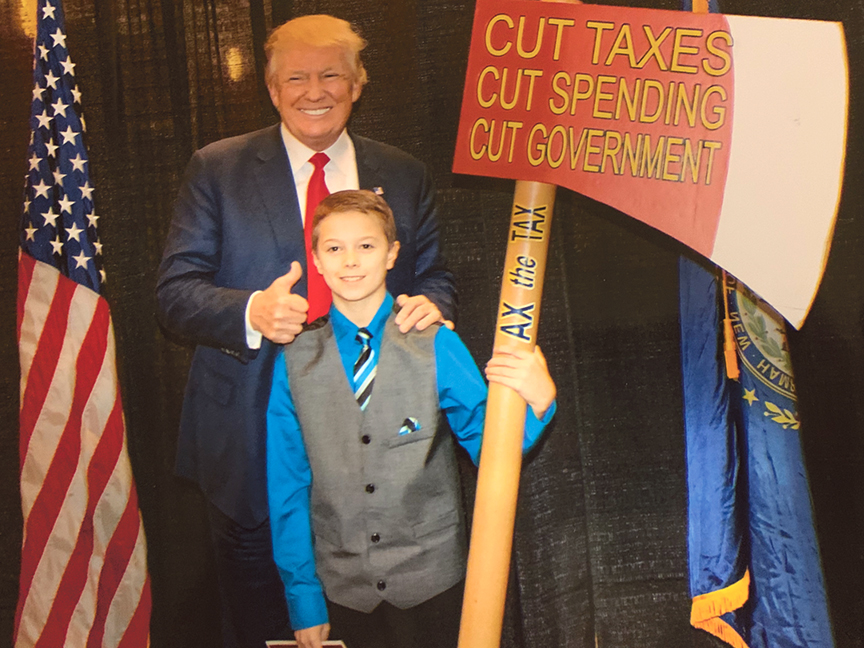 In full disclosure: I’m a lifelong Republican and for over 50 plus years I have voted for good Republicans who I believe will serve our hard-working men and women of New Hampshire better than the progressive liberal Democrats by building on the values of low taxes and limited government.

I was asked to meet with Candidate Donald Trump on Dec. 15, 2015 at a rally in Waterville Valley, as he wanted to sign my “Presidential Pledge,” which he did. 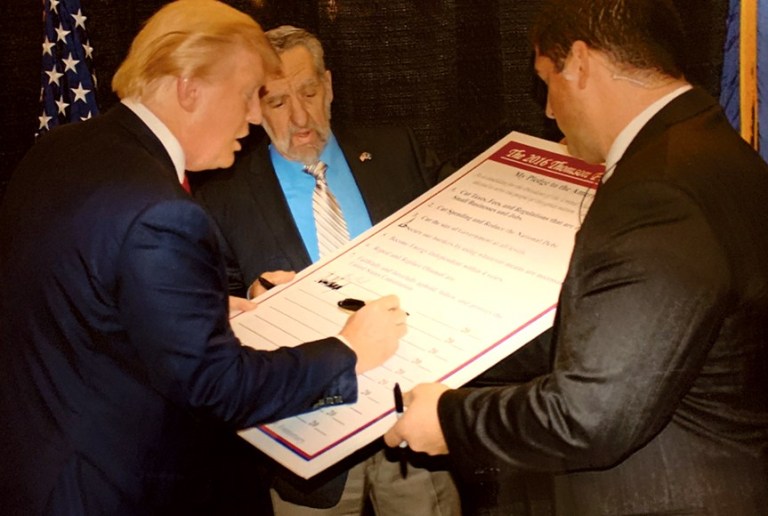 Donald Trump signs the “no tax” pledge in 2015. Tom Thomson is to his left.

Some of my friends asked me how I could vote for Donald Trump and my answer was always the same; I believed what he promised the voters, if elected, he would deliver on; particularly his promise to put forth names of Conservative Constitutionalist nominees to the U.S. Supreme Court.

We now know he kept his promise by nominating two excellent candidates, Justice Gorsuch and Justice Kavanaugh and as I write this, President Trump has put forth another excellent choice in Amy Coney Barrett, to fill the third open position on the Supreme Court during his term.

As we know in Presidential Primaries and General Elections, candidates make many promises to all voters, but over my lifetime most elected Presidents, once in office, very seldom follow through with all their promises.

But President Trump was different, he was a Businessman not a Politician.
Once he was sworn in on Jan. 20, 2017, he went to work to fulfill what he promised to the American people by “Making America Great Again” and he has delivered on his promises. A few are listed below.

By cutting taxes and regulations on businesses (big and small), he created the most prosperous economy in our lifetime.

With record growth in our economy, he created millions of good paying jobs with record low unemployment, the lowest in the past 50 years, just before we were hit by the COVID-19. African Americans and Hispanics saw some of the lowest unemployment numbers in our lifetimes.

President Trump promised to rebuild our Military, wipe out ISIS, reduce and bring home our soldiers, and increased benefits and wages for our soldiers, while improving the VA hospitals for our Veterans.

On Energy, President Trump promised to become energy independent. Today, we are energy independent and everyone sees that benefit when they fill up their vehicle, which is less than half the price per gallon under the Obama/Biden Administration. Today, I filled up for $1.95 per gallon. Yet Biden and Harris want to shut down fossil fuels and fracking, which will drive gas and home heating prices through the roof.

Trump was our “Law and Order” President from day one, he has the backs of our men and women in blue. Because of his nearly 100% support, he has received the majority of all police and sheriffs support; Joe Biden has virtually no support from Law Enforcement. Remember, not once did Joe Biden speak out on the first 3 to 4 months of riots, looting and burning down small business; this is shameful and that’s why Biden has no support from Law Enforcement.

There are many other “Promises Made; Promises Kept” that have a positive impact on our hard-working men and women that President Trump has made and delivered on. Thank you President Trump.

As I said I’m a lifelong Republican and I will cast my vote on November 3rd for President Donald Trump, Governor Chris Sununu and every other Republican on my ballot and I encourage every other true Republican to vote straight Republican and I would invite our Independent voters to join me and even encourage Democrats who have real concerns of the direction Biden/Harris and the extreme base of the Democrat Party is headed to do the same.

Your vote on November 3rd will be the most important vote of your life.
If you want to enjoy a roaring economy and prosperity for all, VOTE for President Donald Trump; if you want higher taxes and a fast track to Socialism, vote for Joe Biden.

Tom Thomson is a Tree Farmer from Orford, NH.