You Might Not Have a Pension, But You Are Paying for One

Moody’s Investors Service recently estimated US public pensions are underfunded by $4.4 trillion.
Public pensions are plans that cover state and local government employees in state and US territories
No private pension plan is allowed to operate unless unfunded liabilities are promptly funded on schedule.

Why is there such a large discrepancy between private pension plans for non-government employees and those plans covering government employees?
There has been a large shift to Defined Contribution (DC) plans nationwide.
(DC plans limit employer financial exposure to pension costs by limiting benefits to whatever the contractual contributions provide.)
Defined Benefit (DB) plans have dwindled to a small percentage of all private employer pension plans.
(DB plans provide contractual retirement benefits calculated by formulas involving length of service and pre-retirement salaries.)

New Hampshire taxpayers, perhaps half of whom have no retirement plan offered by their employers, are paying for DB plans for public employees of a sort that they cannot hope to use.
Furthermore private employers are phasing out DB plans with most offering these benefits only to legacy employees hired in the past. New hires at these companies are often offered DC benefits.

There has been a marked move to DC and DC-type plans for municipal and state employee pensions.
Roughly twenty states have implemented these plans for some or all of their employees.
From the 2014 “Defined Contribution Plans in the Public Sector: An Update” by Boston College’s Center for Retirement Research: 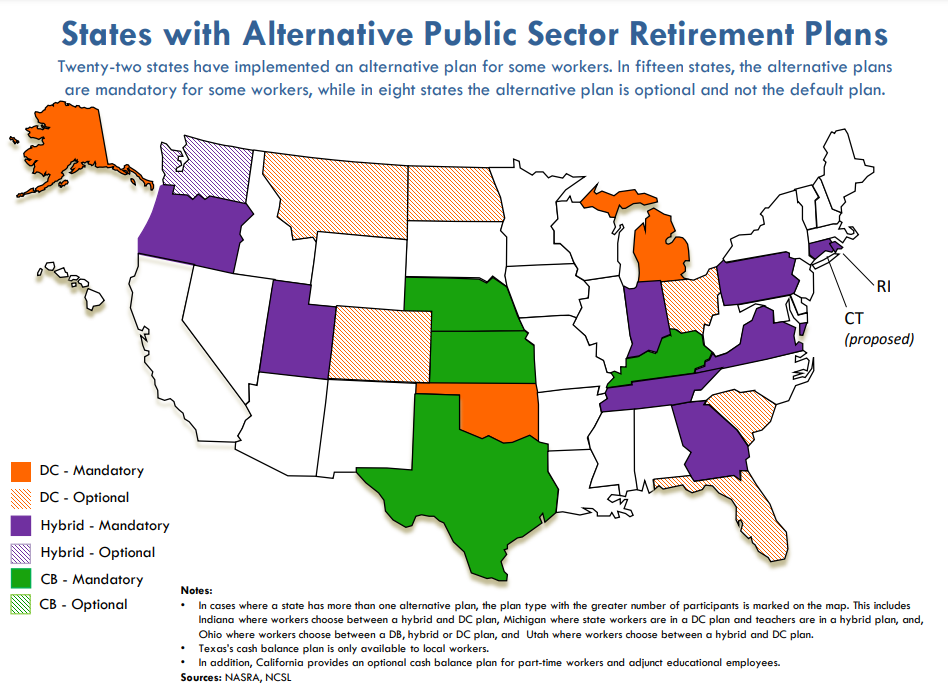 Pew recommended creating an Optional Defined Contribution Plan for New Hires because:
1) A shift to DC plans would result in better benefits for employees in several cases:
a. COLA-type increases far in excess of proposed 1.5%-level increases. DC beneficiaries are often able to direct their and their employers’ contributions where they chose. Any participants specifying US DJIA index funds would have received a 25% increase in benefits between November 2016 and today. This is fifteen times more than a 1.5% COLA.
b. Short-service employees would have massively better pensions. If such an employee leaves the employee and employer contributions in the system this can potentially result in tenfold increases in the invested assets in the period from termination to retirement.
2) A shift to DC plans would mitigate the Unfunded Actuarial Accrued Liability (UAAL) problem by freezing the employee base so that no new hires except certain classes thereof would add to the problem. All DC employees are by definition fully funded at all times. This also means that employers’ budgets would be predictable into the future. This is of course the primary reason for the historical shift in private employer pensions from DB to DC.

There are lots of sources of information on the costs and configurations for public employee pensions.
You should consider getting familiar with the issue. After all, you’re paying for them.